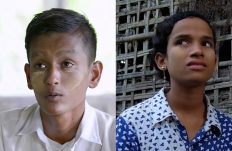 Free Film Screening: “Sitwee” at the Dance Palace: March 31
A short documentary film looks at two teenagers affected by conflict in Burma’s Rakhine state in 2012. Phyu Phyu Than, a Rohingya Muslim girl, and Aung San Myint, a Buddhist boy, were both displaced by communal violence. Director Jeanne Hallacy, recently returned from film-ing in the refugee camps of Bangladesh, will speak and answer questions after the screening.
Read or Download more info for this special events