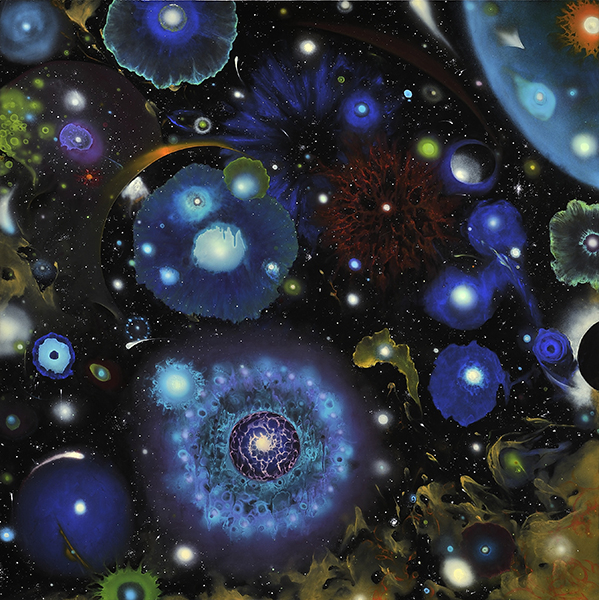 On My Cosmos Series

This series was launched with one surprising, unexpected explosion of sorts.

I had been painting realistic figures and still lifes for years, my last series being dark interiors with figures that spoke of archetypal planetary gods. Preliminary sketches led me to research the solar system. It had a strange effect on me. I wanted more. I read, studied pictures, went outside and looked up. The clouds and the boundless blue sky gave me a sense of peace and paradoxically, a strange feeling of intimacy.

I initially stayed in earth’s atmosphere, painting the clouds in all of their moods. As I continued, ground based symbols that had inserted themselves into the paintings – people, flowers, birds – disappeared. The sky just wanted to be what it was unto itself. And then suddenly, I dove deeper. I was with the planets, the stars, our own galaxy and beyond, the strange and wondrous forms in deep space. I discovered the gift of seeing these amazing objects up close with my small telescope, and through the spectacular photographs taken by the Hubble Space Telescope. Its wondrous pictures brought me into realms where science and magic intertwine. I entered the cosmos, and the cosmos entered me.

I do not paint the universe literally. I look, I imagine, I study photographs, and inspired by the intensity, beauty, color, movement and ultimate mystery of the universe, I begin. I start with the emptiness, and the act of painting opens up a space within, metaphorically and viscerally, that in some ways mirrors the ineffable magnificence of the cosmos I am painting. I live within the paradox of space as the boundless container.